The most important part

All players in the GDL are classed as equal. No player is any different regardless of their age, sex, race, sexuality, ability, or anything else. If you abuse another player for whatever reason, you will be banned from the GDL without refund.

The nominal fee for being a GDL Tour Card Holder is £9.95 per month or £99 per year. If your currency is not GBP, please contact the GDL team to discuss pricing in your currency. This is payable in advance every month for monthly subscriptions and the anniversary of the first annual payment. You are paying to have a tour card. You do not pay entry to any of the qualifiers or majors.

All GDL Online World Tour matches are leg play except for the World Championships, which will be set play, and all legs start at 501.

Players MUST confirm their entry to each qualifier and league season as they see fit by filling the relevant opt-in form on the website.

Once the draw is available, players can get in touch with each other by any means of communication that are available to them including the app, Twitter, Facebook etc. Contact details will be on player profiles. To view your opponent’s player profile, click on their name in the draw bracket. If there are no contact details, please submit a support ticket and we will give you the details and update that player profile asap.

All players will be advised of deadlines that the match must be played by. The formats of games and tournaments will be available on the relevant hub for the tournament. To get to the hub, find the link in the menu.

If a match is unlikely to be played within the given deadline, raise a support ticket and ASK, before the deadline, for an extension. Don’t tell us – we don’t like that 🙂

IF NO TICKET IS RAISED BEFORE THE DEADLINE, BOTH PLAYERS WILL BE TIMED OUT

When requesting an extension you will be asked to provide the following information, you should already have this when raising the extension ticket:

If these three are all okay then you can play the game late once a member of the admin team has reviewed the evidence and confirmed, else you’ll have to forfeit.

Please send screenshots of these conversations when you’ve spoken to them and attach to your support ticket.

If a player does not respond in good time to their opponent, then a support ticket must be created, with evidence of communication not being received. Order of Merit points are only awarded to players in matches which they complete. For example, a player receiving a bye and then withdrawing themselves will not receive Order of Merit points for the bye.

If you don't play your games

All league matches must be played. No league walkovers are given for any reason.

It is very important that league matches are played in line with the schedule. If a player does not raise a support ticket providing information as to why they’re behind, they will be refused entry to any qualifiers until they are up to date.

If you do not play a GDL league match for 21 consecutive days, we will remove you from your league due to the issues caused by players being late playing games. If any player is removed from a league at any stage during the season, the player’s results will become null and void, as if the player was not ever part of the division.

If you do not play a GDL match at all for 90 consecutive days and your membership subscription has ceased, you will lose any and all ranking points that you have accrued.

Fee for leaving the GDL's league

If a player voluntarily leaves their league, there is a £20 admin fee to cover the work required in removing a player’s fixtures and results.

Please show respect for your opponent before, during, and after your game. Communicate with each other. If you’re going to be late or can’t make it, tell your opponent and politely advise of the situation. A minimum of 1 hour’s notice is required to cancel a match unless there is a specific urgent reason to do so. Multiple instances of this happening could lead to you being withdrawn from the competition. There are very few reasons for it to be considered acceptable to not contact your opponent in advance should anything change.

Both players must be satisfied with the quality of the view of their opponent’s board before the match starts. If you are not happy with the view, you have the right to A) ask for a better view and B) if the opponent refuses or is unable to provide a better view, refuse to play the game. If there are any issues, raise a ticket. Some players may wish to record the match in case of any issues. You do not have to tell your opponent you’re recording the match.

Be aware that some people might only have their living room to put their board up, for example, so a little bit of background noise can’t be helped sometimes. If there is too much noise going on in your opinion, you have the right to A) ask your opponent to reduce the noise, turn the music down etc. or B) refuse to play the game until things are to your liking. We hope and believe, however, that this type of thing will be rare within the GDL.

During the match, the process for each turn must be as follows:
1. Throw the darts
2. Call out score
3. Enter score
4. Retrieve darts

If there are any big trebles or winning doubles hit, be sure to make it clear that the dart is in the declared section of the board.

Either player can ask respectfully for their opponent to give a clearer view of the darts in the board and the player that threw the darts must oblige by making it clear the dart is in the section declared. Either push/pull the dart away from the wire or move the camera closer to the board.

The request to see the darts must be made before the score is entered on the match. The throwing player must be aware that their opponent has the right to ask to see a clearer view and, as such, must not rush to take their darts out of the board and must follow the process outlined above.

When the match is completed, the winner must take a full screenshot of the result, including ALL stats and go to gdl180.com/results or click the results button on the hub page.

Note that ANY match played to the incorrect format will be rejected and the match will need to be played again from 0-0.

This could lead to BOTH players timing out of tour matches if the match isn’t fulfilled before the deadline.

Carrying over of ranking points between Majors:

Players who are identified for moving UP a grade by the GDL between Majors will receive the following amount of points towards the ‘Race to the Worlds’ for their new grades, depending on which point in the year they move UP:

Pre-GDL Grand Slam: 75pts
If moved after the Grand Slam, you will receive 50pt less than the player sat in the last automatic qualifying position for the given Grade.

Players who are identified for moving DOWN a grade by the GDL will carry ALL points towards the ‘Race of the Worlds’ for the new grade. None of these points will count towards the previous grade.

Carrying over of ranking points between Tour Events:

Should a player reach a standard far greater* than their current grade DURING the qualifiers (Tour events) for a major, they will be moved up a grade. The following actions will then take place:

1. Accumulated OoM points will be carried over towards the ‘Race to the Worlds’ for the new grade, up to a maximum of the limit listed on the “Carrying over of Ranking Points (between Majors)” section for the previous Major

2. Player moving up a grade starts in the new grade with 25pts less than the player sat in the last position for the given Major race (for all except the World Championships, which is 50pts less unless moved before the first Major)

2. The player has the chance to qualify for the new grade Major. Qualification is confirmed by achieving one of the following:

2.1 Player finishes in the automatic places of the ‘Race for the Major’ in the new grade. The player would qualify for the new grade Major as normal, in this situation.

3. The player moving up a grade will be eligible for the Major of the grade they just came from, if they finish outside of the automatic qualification and extra qualification places for the new Grade and their 3month 3DA falls below

4. ALL points earned in the previous grade will still count towards the ‘Race to the Worlds’ for that grade (but see ‘Eligibility to the World Championships’)

**If more than one player qualifies via these methods, the prelim matches will be against the next player up on the OoM

Players who are identified for moving DOWN a grade by the GDL between qualifiers will carry ALL points towards the ‘Race of the Worlds’ and Major for the new grade. None of these points will count towards the previous grade.

Eligibility to the World Championships:

Players are eligible for one Grade World Championship only, the highest Grade that they qualify for

Those who have moved UP a grade and deemed too good*** to qualify for the Worlds of the grade that they came from BUT failed to finish inside the top 64 of the new grade, are entitled to play a preliminary round at the Worlds for their new grade as long as they either reached a quarter-final or better in a major or a final of a qualifier in the grade that they came from. The preliminary round will be against the player ranked 64th in the ‘Race to the Worlds’ OoM. If more than one player qualifies via these methods, the prelim matches will be against the next player up on the OoM i.e 63rd then 62nd….

The X players who have moved UP a grade but still eligible for the World Championship that they came from (see ‘Eligibility to the World Championships’ section) will be seeded 1 to X, in the order of order of merit points they won in the grade they moved from (and separated by standard tiebreakers if needed). This will then be followed by the top ranked players who remained in the grade, ordered by standard order of merit rules to make up 64 players in total.

Board View and Sound

It is expected that your board view is clear and close up enough for your opponent to see the segments properly.

Below is an example of 2 good boards.

Players must have a microphone enabled in order for their opponent to hear them and they must not have their volume so loud that their opponent has feedback on the sound. 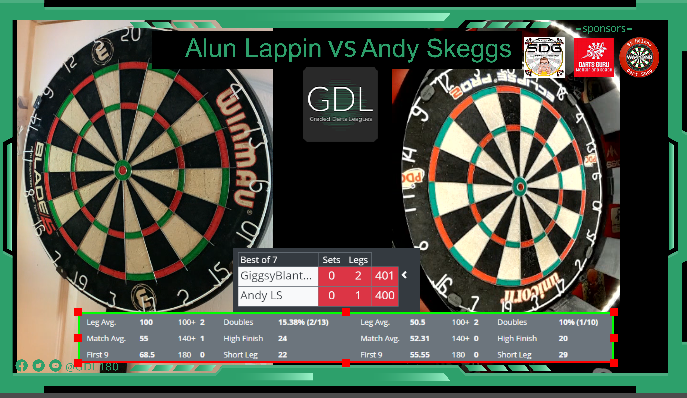 We hope there are no issues between players but if there are, you must raise a support ticket.

We are all adults here and most issues can be resolved with mediation.

Any decision made by the GDL are full and final.

DO NOT GO SHOUTING ON SOCIALS ABOUT ISSUES YOU HAVE HAD before trying to work it out between us. Let’s sort it out sensibly.

ANY PLAYER FOUND TO BE CHEATING WILL NOT ONLY BE BANNED FROM ALL GDL COMPETITIONS FOR LIFE, BUT THEIR NAME AND DETAILS WILL BE SHARED AROUND TO OTHER DARTING ORGANISATIONS.

Use of illegal substances is strictly prohibited. Anyone found to be using them during a GDL match or admitting to using them before the game to enhance performance will be given an immediate ban from all GDL competitions indefinitely.